There is very little explanation of why I made Eldritch Gambit in the book itself, which is intentional. I am one of apparently few people who don't find author editorializing in core books enjoyable. That said, this is a blog post, and editorializing is great for a blog.

The primary reason I wrote Eldritch Gambit was to have a skeleton (pun intended) system for BONED. In this game, you play as amnesiac skeletons trying to recover their memories and escape from an inter-dimensional oubliette. BONED is in playtests right now and coming out soon enough. We are having a lot of fun - Eldritch Gambit shines in this setting!

In this very specific context, the problem with using most existing D&D-alikes is that you start out with a class or other array of abilities. This gives you a "niche," and a defined power set right from the start. But what if you don't know who you are and only find out during play? It would ruin regaining memories if you already knew you were a Rogue or Magic-user. You can't just hide it either, because so many of their features are dependent on this initial choice

So, I made most things very dependent on Attributes instead, and magic largely dependent on items. You can discover your class and such later - it only affects the die used for non-combat Checks. While it was tailor-made to a specific setting, I started to feel like this was an optimal way to play.

The other reason I made Eldritch Gambit is that I really liked the idea of push-your-luck mini-games and got to focus the system around that (Gambits). It was also a perfect receptacle for many other ideas I had or ran across in other games at the time, like freeform backgrounds, volleyball initiative, non-incentive highlights XP, armor as HP, gambling with XP, etc. It went from being just a design experiment to support a particular weird setting to a celebration of how I just like to do things in fantasy RPGs.

To be blunt, it has not been a commercial success. I'm a failure as a designer I guess, but at least I got to make the game I wanted to play.

I've played and game mastered a wide variety of systems since the mid-80s, starting with Basic D&D. This has definitely given me a specific set of experiences that informed what I do and do not like. Maybe these tastes are not for everyone, but they're definitely for me. I already did positives in the book and above, so what follows is a list of gripes I have had playing other systems and what I did differently in Eldritch Gambit.

So if you don't like griping, bail out now.

- my Gaming Gripes, and my Solutions in Eldritch Gambit -

More later as I think of them.

Portrait of the author bloviating. At least I didn't put it in the book . There is very little explanation of why I made Eldritch Gamb... 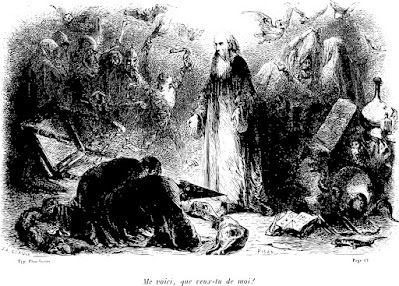 Jake Eldritch
I'm currently the one-man band behind Planarian Games, but plan to branch out and collaborate more in the future. Author of METTLE Core, Eldritch Gambit, Clown Helsing, Figment, and others.