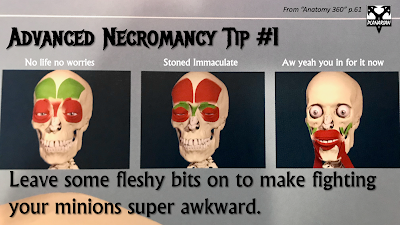 A fishy flail I made for Eldritch Gambit:

Kind of a cross between Zaburo's scale sword from Naruto and a Mary Poppins handbag. 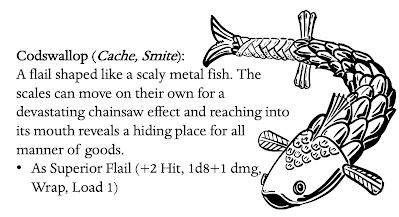 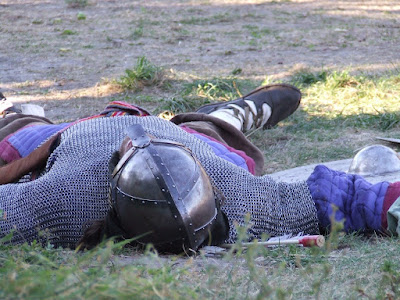 Image by Ajale from Pixabay

One of my most shattering RPG experiences was attending a fantasy Live Action Roleplaying (LARP) session in the early 90s. My friends and I came in, whacked each other with foam weapons, argued about the rules, the usual. We were scrubs. The big-deal players came in with incredibly realistic suits of armor.

About half way through we came upon one of the biggest deals in the finest armor collapsed on the ground screaming, with a cadre of staffers around trying to help him. They told us he had slipped and struck his hip on a rock. There was no fight, no glory, no game, but there was definitely a rock there and it was fearsome. My own hip hurt just looking at it, and apparently all that plate mail didn't do him a lick of good against western Maryland granite.

I think of this fellow in armor, screaming and clutching his hip, whenever I consider how much realism I want in an RPG.

The Moment the Penny is Up in the Air...

I've kept the following "Grook" in mind when making random "seed" tables for Eldritch Gambit. Everyone already knows that with tables you can either take what is rolled, choose what you want, or make up something yourself. I think there is another element to tables that I want to support, which is revealing your hopes. 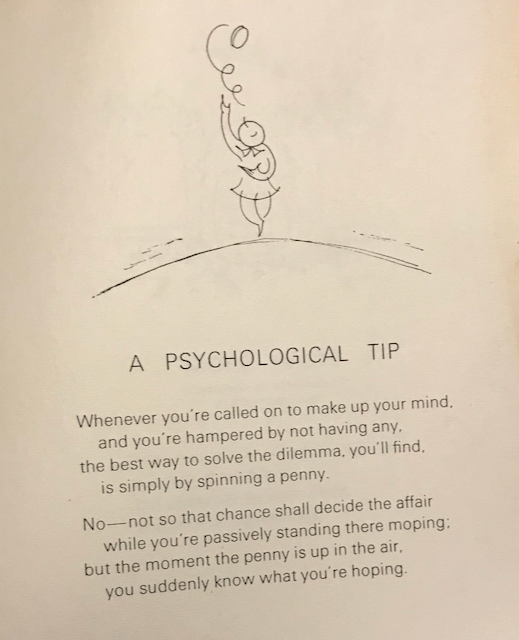 In a role-playing game, the moment the die is rolling, you are hoping. For checking success and such, this is no mystery. You usually want to succeed. For a random table or as a GM, things aren't so clear. Often you have no idea what you really want. It is a secret from yourself.

I find that a creative and interesting table reveals your desires. At this sort of liminal pause in time you have the chance to realize what you actually wanted deep down, not just what you could get. You could say it breaks analysis paralysis but I think it is more than that.

After all, the table becomes immaterial at that moment. Your hope might not even be on it!

Note: the page above is from "Grooks" by Piet Hein, a weird little book of poems I liked as a child and onwards. It's an influence on me, I think for the better. I recently became curious about Piet Hein and he's more interesting than I thought. Some of his poems that I thought were just twee are actually veiled allegories about being part of the resistance to the Nazis in Denmark. Whoops!

Any tables out there that had you HOPING when you rolled?

Spent some time in R abusing a script I originally made for work:

It takes in an RPG PDF and makes a word cloud out of it!

The below is the general vibe of B2: Keep on the Borderlands: 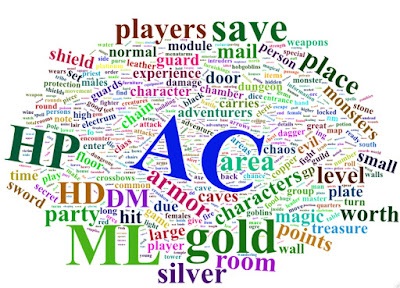 And this one is B4: The Lost City (my favorite): 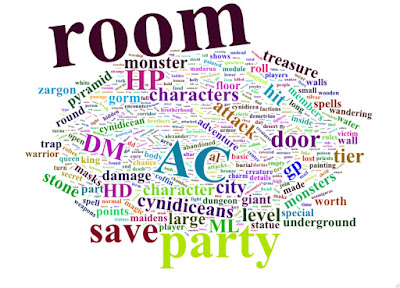 From a simple semantic similarity analysis, B2 and B4 have:

It's possible to take pretty much any module and see how semantically similar it is to any other module, though what this means exactly is (ironically) uncertain. I do think it may be good to run this analysis if you were planning to emulate the contents or style of a certain type of adventure. A dreary abuse of the method would be to claim it lent validity to being more OSR-than-though.

Note: This is a revision of an earlier blog post, based on comments. Keep in mind that some of the earlier comments refer to a time when I had buggered up the number order.

I had been looking at hex flowers, which are fascinating as an idea and enjoying a fair amount of creative efforts. I was wondering why they used the total of 2d6 instead of just the lowest, which is statistically the same and would let you use single die numbers in the legend:

There is an earlier forum post on FICTIONEERS where I originally mentioned this and got the numbers right, but for a take highest roll instead of take lowest. Another poster ("Qo") provided proof that the odds were the same. I've reformatted what Qo wrote below: 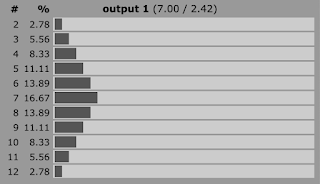 So after thinking it through and mulling over the comments, the main problems is that due to the ordering, it still isn't much more intuitive. It is also less straightforward and may mislead some users into thinking that you just roll 1d6. I'm glad I looked at hex flowers and may use them in the future, but I'll probably be sticking with the standard 2d6 total for the legend.

My Game Complexity Moment of Inflection

I can point to a specific event in my gaming timeline where my ideas pivoted entirely. An "a-ha" moment, or I suppose an "oh-no" in this case.

AD&D 2e in college, late 90s. We were playing with the Skills & Power ruleset, which added a great deal of customization to AD&D. A new player familiar with Basic came in and wanted to try it out, so the DM took him aside and explained all the new rules: subabilities, skills, powers, specializations, etc. It became painful for me to watch because his eyes were visibly starting to glaze over. The DM just pressed on, excitedly explaining how far the game had come. New guy makes a character, plays for a bit, never comes back.

Now I had no trouble with Skills & Powers or the mindset at the time, but just seeing someone else bounce off of it really made me think. What was gained by splitting attributes into subabilities? All the different powers? I had just accepted it all. I kept playing in that group and had fun, but the seeds were planted. I no longer saw complexity and "crunch" for its own sake as a desirable thing.

And if that was not what I wanted, what was it about the game actually appealed to me?

Epilogue: later I learned the new guy was off doing an Empire of the Petal throne thing elsewhere, so I suppose he wasn't turned off of RPGs entirely. We were pretty condescending overall to someone who was probably gaming on entirely more sublime level than we were.

So for those of you who aren't ancient grognards, a Subability in Skills & Powers era AD&D meant each Attribute was further split into two separate subabilities. So you went from the standard 6 Attributes to a whopping 12.

Take a wild guess which subability of Strength everyone cranked as high as they could. Go on...

For example, I had a 16 Strength Fighter at the time and I immediately bumped Muscle to 18 so I could roll percentile Strength and dropped the useless Stamina subability to 14. Everyone else did something similar with Strength, even the wizard players.

So It was presented as a choice, but it really wasn't much of one in the end.